InnoKOL | Jim James: The Digital Shall Inherit the Earth from The Analogue

On Sept.23rd (UTC+8), Innoverview had a fascinating  conversation with Mr.Jim James, who is the Founder of  EASTWEST  Public Relations, talking about his 25 years' work experience in PR industry and deep insights on the digital marketing trends .

Jokia: How would you describe yourself in three words?

Jim: We only accomplish in proportion to what we attempt.

Jokia: Can you please share more about your educational and professional background? And we’d love to hear what brought you into the public relations domain.

Jim: I have been fortunate to have lived and worked around the world. As a child I lived in England, Africa and America, and studied a degree at Manchester University with a year in North Carolina, USA. I then attained a post graduate degree in Marketing in the UK. I worked in an advertising agency, a food company and then a music technology company before moving to Singapore in 1995 to start EASTWEST Public Relations.

I literally fell into public relations. At the age of 18 I needed to raise money to travel to Australia and found that by jumping out of a plane I could raise more money than by earning per hour. I secured press coverage for my expedition to Australia, and did the same when I went on an expedition to Central America. So starting an Agency was really the natural extension of what I had learnt to do before I started working for other people.

Here is the picture of my jump at 18 years old which led to my PR career, over the fields of Kent. 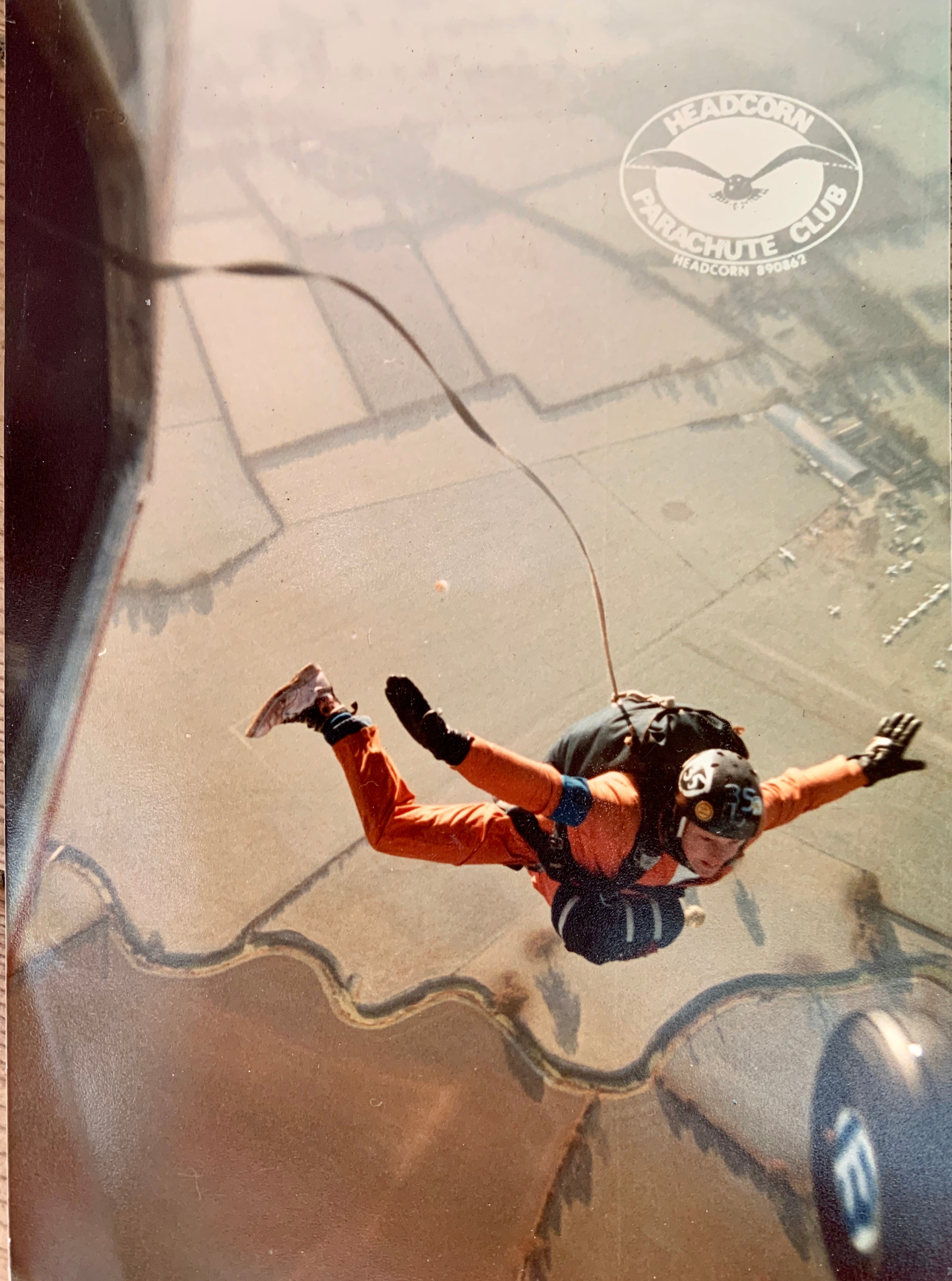 Jokia: Since 1995 you have provided both tactical and strategic counsel to over 500 clients, specializing in B2B technology companies. Could you share 2-3 cases impressed you most?

Jim: There are so many of which I am proud as the team has done excellent work but I will choose 2.

The first one - I worked with the regional CEO of Philips electronics in Singapore in 1998/1999 as the Company was changing its focus from manufacturing to R&D. As a result, there were to be many jobs lost, and the company was concerned that consumers would turn away from the brand. We worked tirelessly, and with the Singapore Parliament, to educate the market on the benefits of Singapore moving up the value chain to value added services and to explain the merits of new higher paying jobs.

In China we worked for a company called Enstoa, a digital transformation consultancy from NY. I liked this case because the company needed help with their corporate messaging, making their company accessible to the China market. We hosted a very successful press briefing, introduced their social channels e.g. WeChat, and trained their young China team to become confident spokespeople at a large Oracle partner event, even designing their booth materials for them.  I enjoyed seeing the growth in confidence of the Chinese staff as they grew to understand the company better through our work, and the sales success which led from that. The website traffic then from China to their global site became one of the greatest sources which showed that our work delivered results.

So the second case is more recent, and as there are members in this community in China they will understand the satisfaction of helping young people to grow and to master a new skill, at the same time as growing a company's reputation. We also filmed their speech in front of the 500 pax audience using my iPhone, and then edited that on my phone whilst at the event, added titles and music, and uploaded it to their WeChat and shared with their social media team in NYC. An example of Realtime content creation and amplification. And in my experience of 13 years in China, the young people are brave and keen to learn new skills. It's a real joy.

Jokia: As an entrepreneur yourself, what are the opportunities and challenges for foreign companies to expand Chinese market from your perspective?

Jim: As they are entrepreneurs and KOL's there is probably little more that I can add that they don't know. But here goes: Opportunities are 1.4bn people, over 100 cities with 10 million people, and a corporate environment which has Government, domestic and international players. Congestion, pollution, urbanisation are problems being solved by enterprises in partnership with Government, and so these are major industries proving opportunities alongside the usual trends of domestic consumption, travel, education and healthcare.

The biggest opportunity really is the disruption caused by technology. There isn't an industry nor a company which is safe from digital transformation; and this ultimately is where the young will conquer the old, the brave shall overcome the meek.

Challenges are as many for foreign companies. Recent legislation, political risk, currency withdrawal, restrictions on ownership, are all Government led problems. Allied to this is that of culture and competition. It is now very hard for foreign companies to provide a better product or service than the Chinese companies; and playing overseas leads to higher costs. The way forward is going to be working with indigenous products and partners whilst bringing international skillsets.

Jokia: You were an active member of the British Chamber of Commerce in China Executive Committee, and serving as Vice Chair from 2017-2019.From your experience, what are the effective ways to stimulate the development of commercial chamber?

Jim: I enjoyed to serve the community by playing a role at the British Chamber of Commerce from 2007 - 2019, as a Board Member and founder of the British Business Awards in 2008.

The Chamber is a community organization which helps to support members by ensuring that they are supported commercially and socially. The British Chamber played a role to be a voice for the members to speak both to the British Gov and the Chinese Government. A Chamber needs to continue to bring energy and organization to its members whilst they are focusing on the business opportunities in China.

Jokia: We’ve noticed that you established the Morgan Motor Company import business in China in 2013. How would you predict the future of automotive industry development?

Jim: Starting that business in China was a great challenge and source of excitement and a good learning experience. I was engaged as the interim CEO of Lotus cars in China also as a result, and started the British Motorsport Festival as a platform for British brands. I created a JV with the ACE Gear group in Beijing. However, I am pleased not to be in the auto business anymore.

Automotive in China will be comparable to that all over the world. Urban centres and the young will start to avoid traffic and ownership. Electrification will drive growth for shared transport and mid distance journeys, whilst fast paced transport e.g. rail, will start to overtake cars as the transport of choice because a) people will travel from urban centre to urban centre where cars are not allowed b) people want to use their mobile devices for productivity and entertainment and driving doesn't allow that.

The industry will be a mobility industry not an automotive industry. Companies will need to adapt to this new normal; and one not created by COVID but by congestion, pollution and preference.

There will be some leisure car brands, like Morgan, which will become much like horses have become; a luxury for the few and a spectacle for the many.

Jim: Digital communications have been the best development for public relations since the Gutenberg press was invented around 1436. It enables everyone to publish their own news, and so this democratizes communication down to individuals and companies. It has also created a commercial opportunity for Agencies as clients now need to create a lot more content and to manage the channels themselves.

Optimization is the subject of our SPEAK|pr process - Storify, Personalize, Engage, Amplify, Know. In the past relationships were key, now content is king. Personalization of content at scale is the way that brand owners need to address their audiences in the digital age.

As an example with Morgan, I had a 3D strategy: Display, Drive and Digital. So brands will need to create opportunities for their product or service to be experienced, but then to amplify that via social channels. The strategy is what we call digital storification.

Finally, brands will need to make the customers the hero of their brands, not the products. This is important because it will be customers who amplify their experience with social media, and this will be the best way to build credibility and loyalty. brand loyalty is simply fickler. Therefore, PR needs to be a constant process of content creation, amplification and evaluation. There isn't the luxury of not communicating about a brand anymore; and the best way to generate sufficient momentum is to engage the 3 communities: internal staff, partners, and customers. Anyone who buys a Tesla or Apple or stays in the Shangri-La will tell you that brands are still very much part of their buying decision.