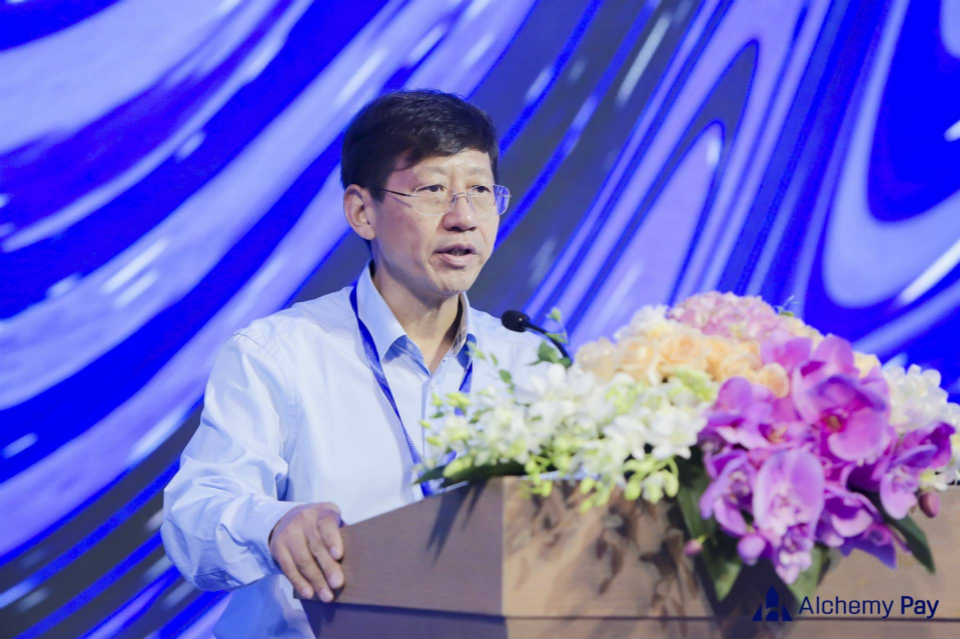 The event received immense support from China Banking and Insurance Regulatory Commission (CBIRC) and CBIRC’s Supervisor of the Board of The Financial Institutions, Mr.Chen Weigang, was invited to deliver a keynote speech. On the topic of Blockchain applications, Mr. Chen said that blockchain adoptions are accelerating and are expected revamp business models, reduce costs, drive economic efficiencies economy, and act as a catalyst for growth. 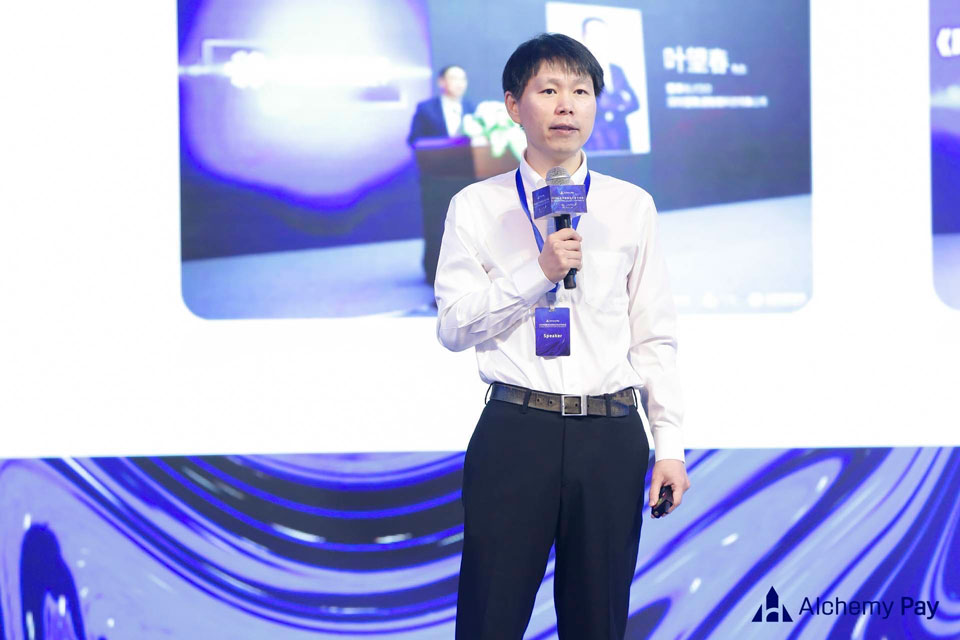 Zheng Xilong, Chief Scientist of Blockchain Research Institute at Ping An Group OneConnect , delivered a keynote speech entitled "Technology as Foundation, Breakthrough Scenarios - Ping An Blockchain Applications", which introduced the development of Ping An OneConnect blockchain development and shared their experience in carrying out blockchain projects centered around the five ecological circles of Ping An. 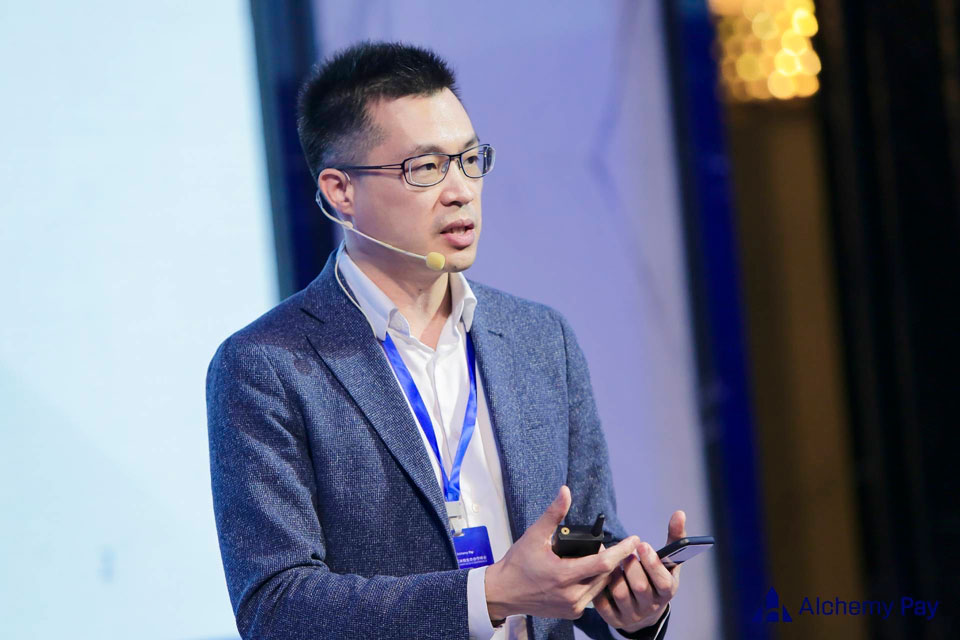 This was followed by Richard Wang, Partner at Draper Dragon, in a keynote speech entitled "Rebuilding the Business Industry - Blockchain". Richard says decentralized applications have the advantage of data migration and easy deployment, and blockchain will revamp businesses in terms of distributed storage, DeFi/financial services, sharing economy, supply chain, etc. 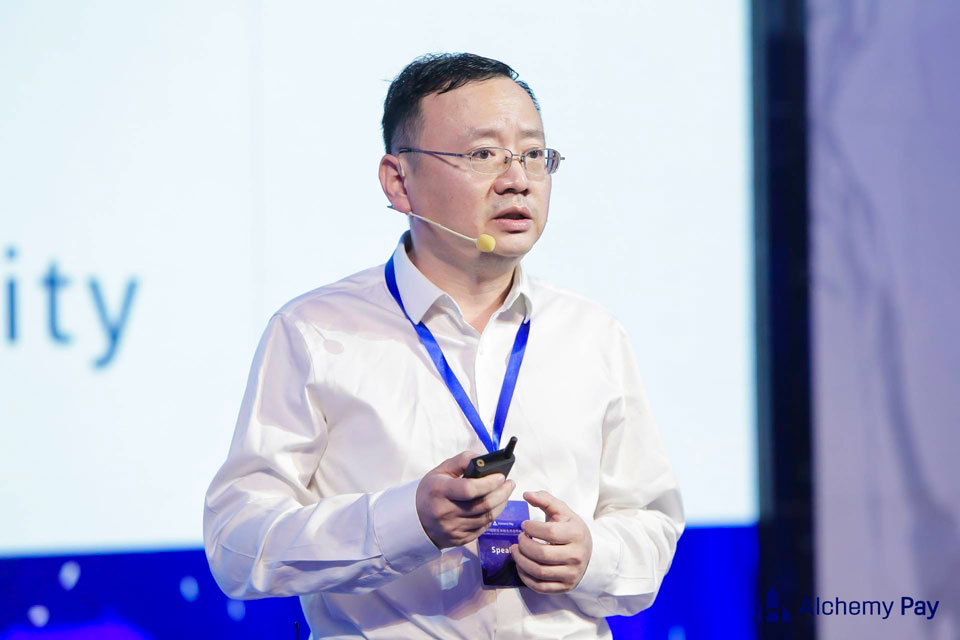 Mr.Xin Sihai, Head of Information and Blockchain Technology of Sinochem Business Research Institute, delivered a keynote speech entitled "Blockchain-based Commercial Digital Identity BIDA Application". According to Mr. Xin, digital identity is a specific sequence of numbers representing the principals in the digital world and the distributed digital identities based on blockchain have the advantages of traceability, distributed, data sharing and security. BIDA has a wide range of prospects in the application of enterprise business application, fintech, digital government, 5G/edge computing and other applications. 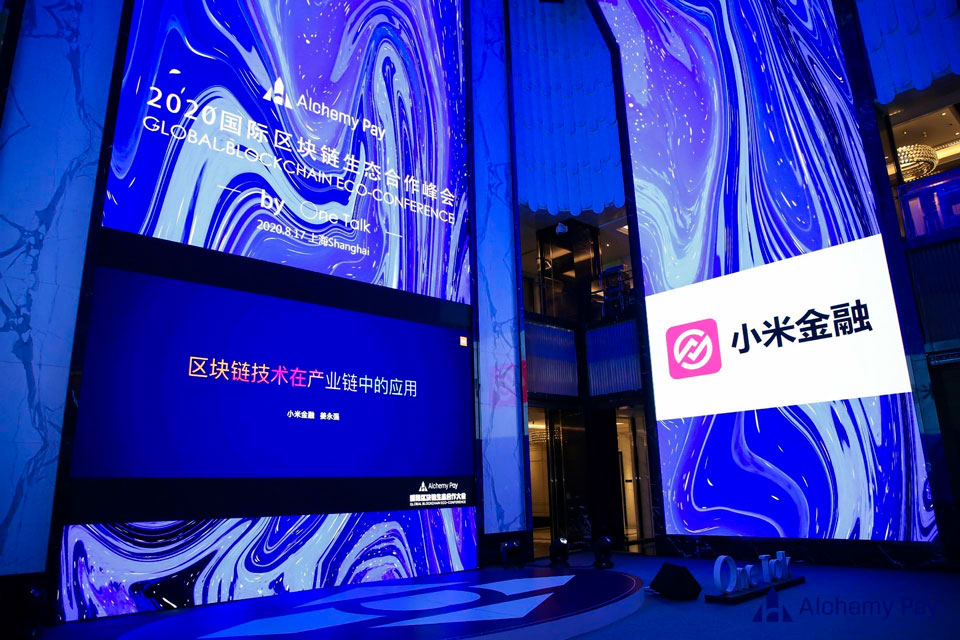 How can blockchain empower the industry? Jiang Yongqiang, GM of Xiaomi Financial Technology, said in a keynote speech entitled "The application of blockchain technology in industrial chains", in terms of the financing and credit problems faced by enterprises in the ecological chain,Xiaomi Fintech leverages blockchain technology to provide a variety of services and create a new financing platform that penetrates the upstream multi-level financing services, to help industrial chain reduce costs and empower data and finance to accelerate the growth of enterprises. 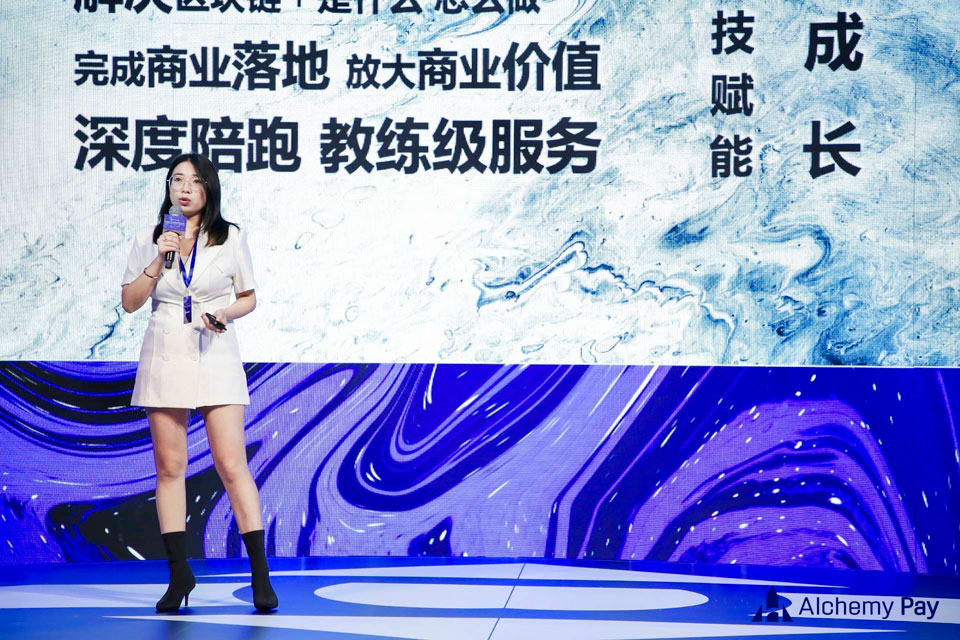 How can "Blockchain Plus" be leveraged? BP Accelerator Co-Founder Ms.Tang Shi gave a keynote speech entitled " BP Accelerates “Blockchain plus” and Business Evolution". Tang Shi said that blockchain plus is of great value, enabling real economy and business incentives while creating new business models and innovative methods of asset circulation. 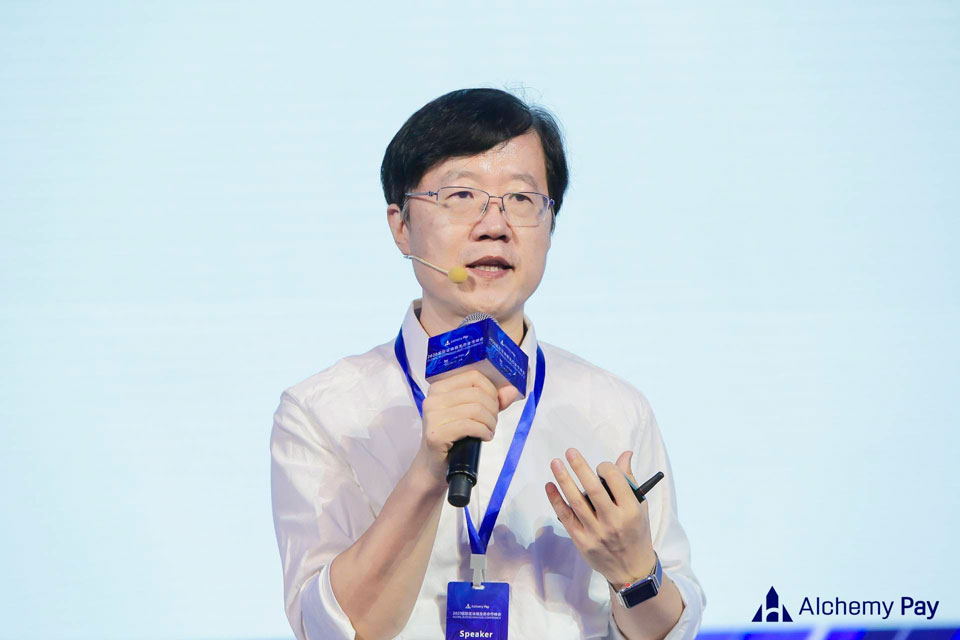 Cliff Liang, GM of Amazon, AWS, Architecture, Greater China Region, delivered a keynote speech entitled "AWS For Blockchain Global Development and Ecological Construction", saying that AWS' layout is contributing to the global development of blockchain ecology and will further promote the use of blockchain technology and the development of the ecosystem together with Wangsu Science & Technology. 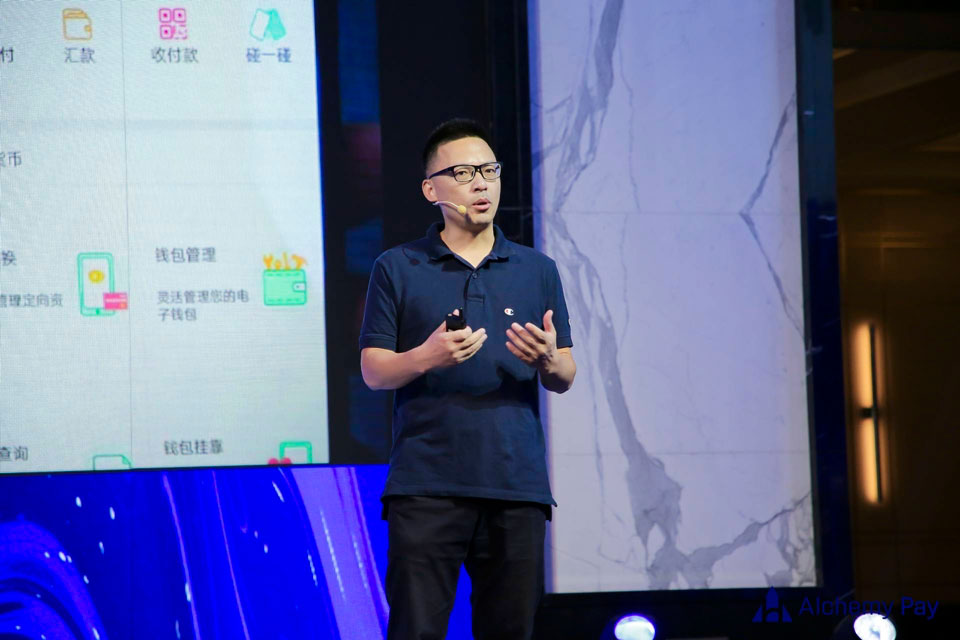 Jiang Zhenxing, Former Dean of ZhongAn College, gave a concluding speech entitled "Blockchain’s Empowerment of Financial Science and Technology Innovation". Mr.Jiang said that blockchain ecology is very important and the innovation in fintech cannot be separated from the support of the government, just as the development of the entire industry requires cooperation and joint efforts of all market participants. Proceeding into the afternoon, Roger Ver, Founder of bitcoin.com, delivered a congratulatory message to Alchemy Pay, the host of the 2020 Global Blockchain Eco-Conference, and congratulated Alchemy Pay on their achievements. 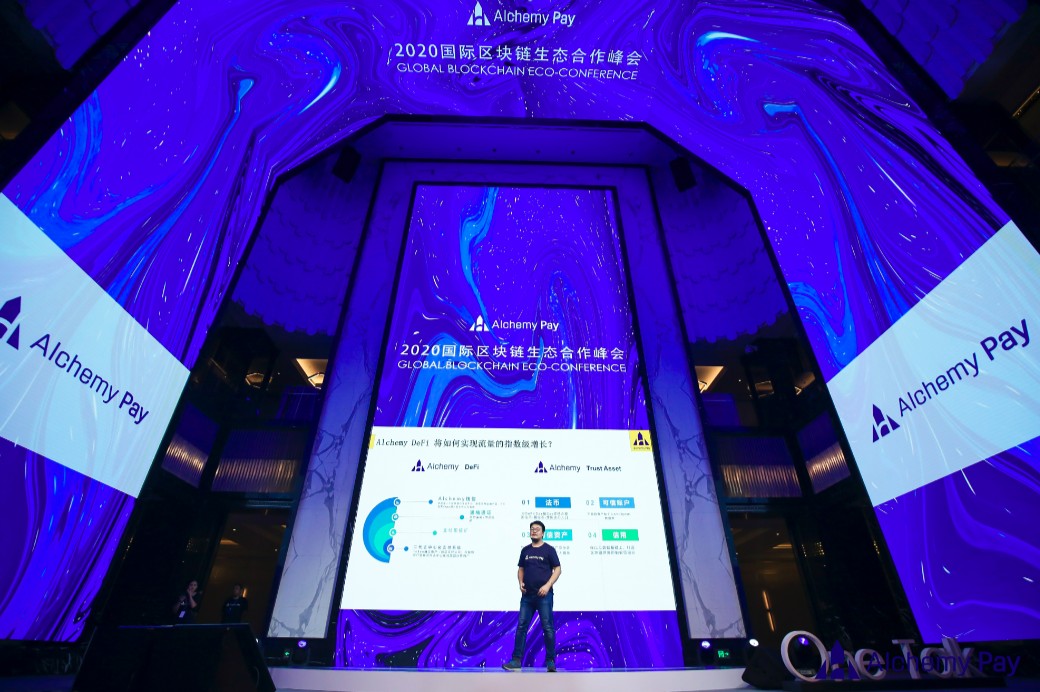 CZ (Zhao Changpeng), Founder of Binance, delivered a keynote speech entitled "Ecological construction and compliance development of Binance". CZ said the currency security was very serious about safety and compliance and that each exchange still needed to work towards the 100 percent rule. When it comes to the current hot DeFi, CZ thinks it is a relatively innovative concept and only 10% of projects will be successful in the long run. However, CZ highly recognizes the breakthrough significance of DeFi for the blockchain industry. At present, many financial institutions have set foot in the blockchain industry, which further promotes the expansion of the digital currency payment scenario. At the same time, CZ suggested that the traditional financial market have an in-depth understanding of blockchain, and Binance hopes to provide a bridge between the traditional financial market and digital currency. 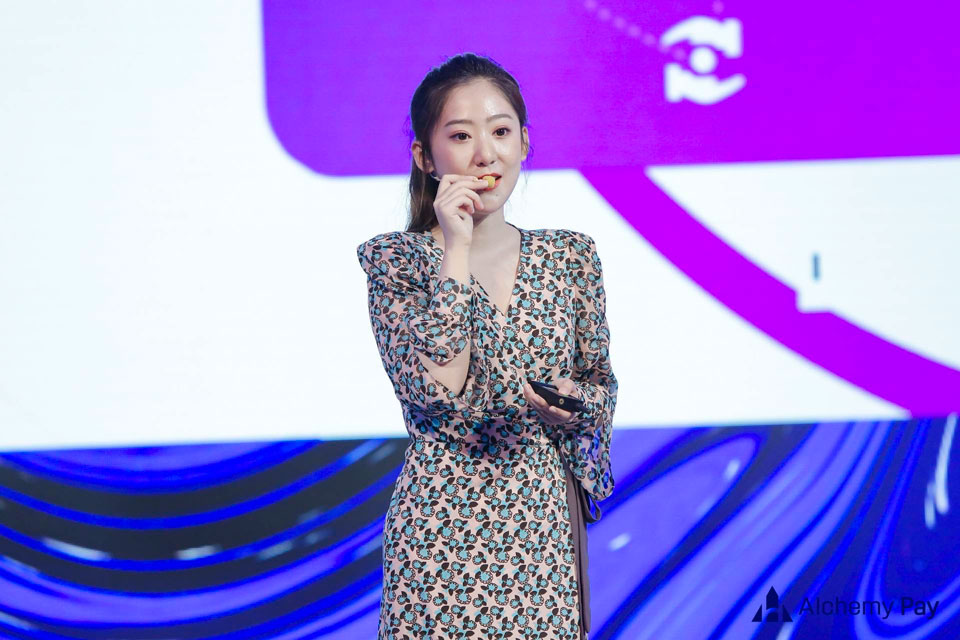 Darwinia CMO Bree Yin gave a keynote speech titled "How to Build the Internet of Assets in the Future". Bree emphasized that as a decentralized bridge chain, its technological innovation has achieved breakthroughs in solving the challenges of heterogeneous chains and cross-chains, and will first open up to Polkadot blockchain. The ecosystem is interconnected with other public chains such as Ethereum, and helps DefiNFT, markets, games and other applications to achieve multi-chain version upgrades. The development of Darwinia will further promote the evolution of the asset Internet and enrich the development of the Polkadot ecology. 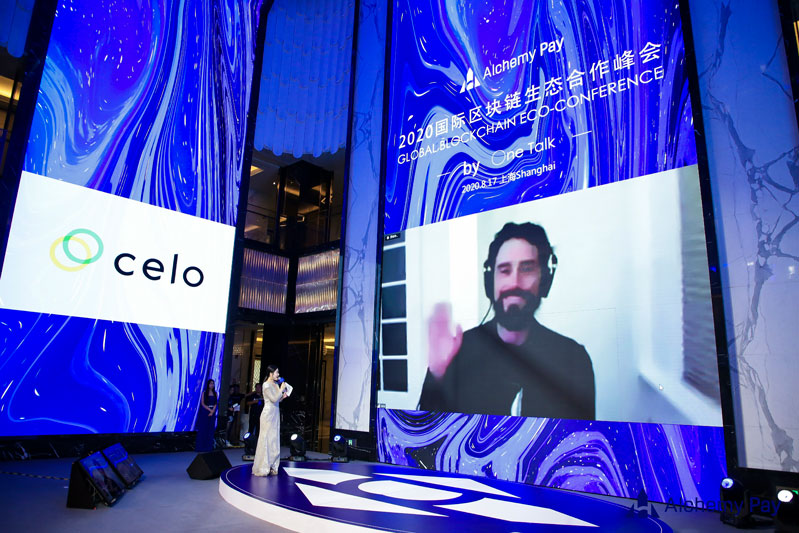 Rene Reinsberg, Co-Founder of Celo, presented at Alchemy Pay 2020 Global Blockchain Eco-Conference on the topic of "Banking the Unbanked: Celo - Open Financial Tool At Your Fingertips" and shared his vision of a new financial system built for the world where anyone with a smartphone can benefit from. Rene demonstrated how Celo platform and its cUSD stablecoin can enable payment to another party via their phone numbers in a quick, cheap and trustless manner. 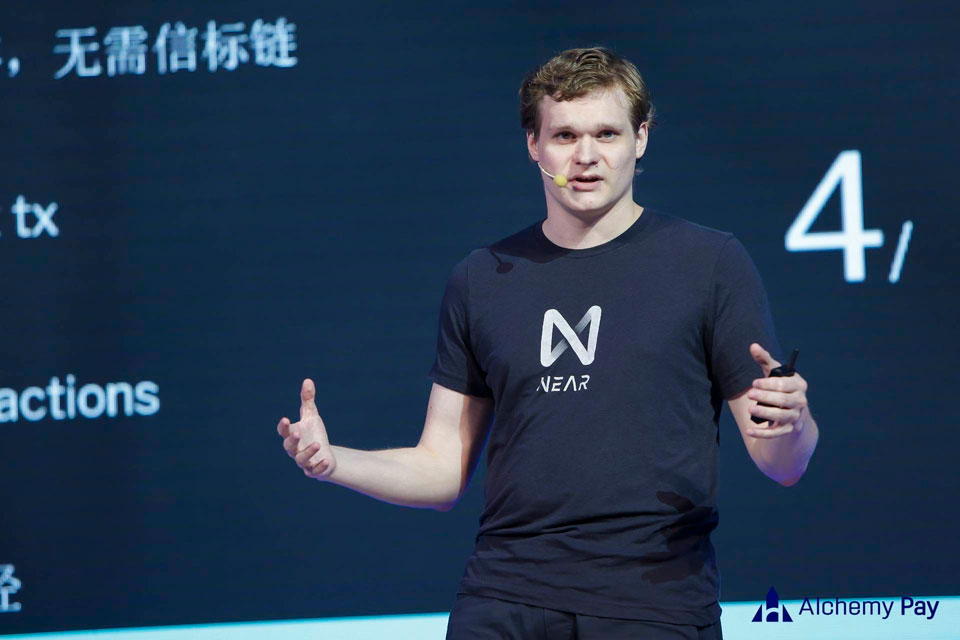 (Image: Illia, Co-Founder of NEAR)

With DeFi's user base still growing, what will be the negative impact on the network from the popularity of Ethereum DeFi? NEAR Protocol Co-Founder IIIia gave a keynote speech entitled " DeFi Expansion: Sharding, Interoperability and Off-Chain " The DeFi expansion will first need to extend the financial instruments themselves in terms of fragmentation, interoperability and lower chain, according to IIIia. Jokia (Yin Baojuan), Founder of INNOVERVIEW, spoke to Discus Fish, the Co-Founder of F2Pool and Cobo wallet, in an interview on the topic of "Blockchain Ecological Development and Scenarios: From Mining to Wallet", Discus Fish stated that digital assets have become an important part of human assets. In the future, everyone will have digital identity and digital assets from the date of birth, and all user behaviors will be digitized. In an interview conducted by Alchemy Pay’s marketing director, Ciara Sun, VP of Global Business and Markets at Huobi, on the topic of "Riding the wind and waves at the forefront of the crypto industry. Huobi’s spot-on decisions", Ciara Sun said that Huobi regards the development of global compliance as a long-term strategic planning goal. At present, Huobi has obtained compliance exchange license in many countries and regions around the world, and provides professional products and services according to different user habits in different regions. At the same time, Ciara Sun also mentioned that blockchain education is an important part to promote the growth of the industry. By letting every user know what blockchain is, it can effectively promote the development of blockchain on a global scale. 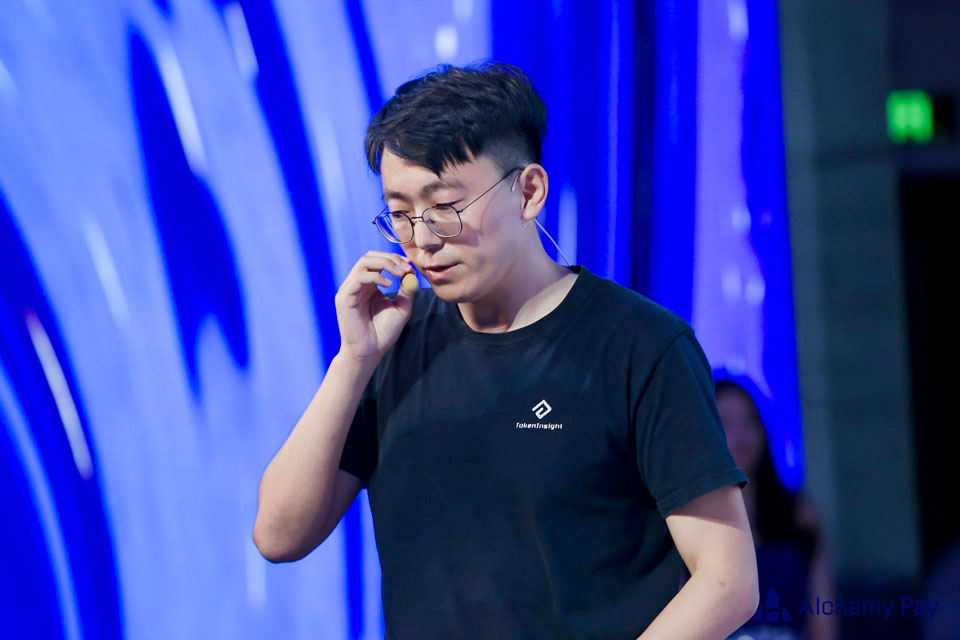 Tao HU, the Founder of Tokenlnsight, gave a keynote speech entitled "Digital Asset: Industry Development Report". Mr.Hu said that it is expected that DeFi will continue to maintain excellent performance in the near term for the remainder of 2020. However, challenges exists among the many opportunities within DeFi and that there will be plenty of bubbles looming. Project leader at Binance’s BUSD, Helen Tu, gave a keynote speech on the topic "Entering DeFi? Binance BUSD 2.0". Helen Tu, who leads Binance BUSD, introduced the current main use cases of stablecoins: arbitrage, transfer of value, trading and savings. She believes that stablecoin is a bridge between Fiat and digital currencies and that purpose of each stablecoin is different. At present, the competitive advantage and core purpose of BUSD lies within the trading space. In the future, BUSD will continue to serve its role within trading while spearheading into the DeFi market. 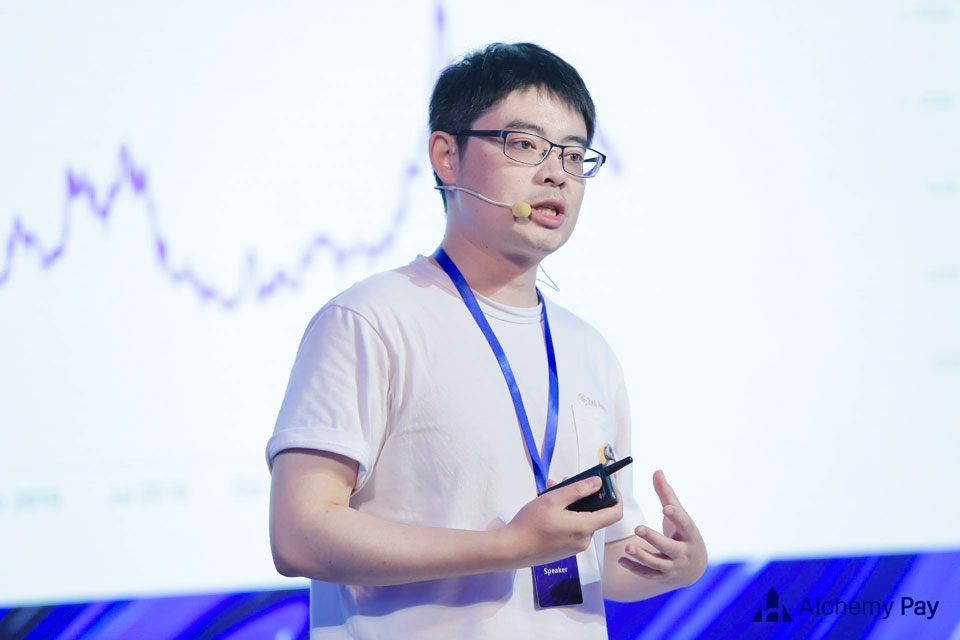 Yu LEI, CEO of The Force Protocol, gave a keynote speech titled "ForTube's DeFi Practices". Mr.Lei says the Defi ecosystem is booming, the Defi app market is exploding and the risk of smart contracts being attacked has risen sharply. ForTube has the technical architecture for the next generation DeFi applications and already has over $20 million in lockers and is growing steadily. 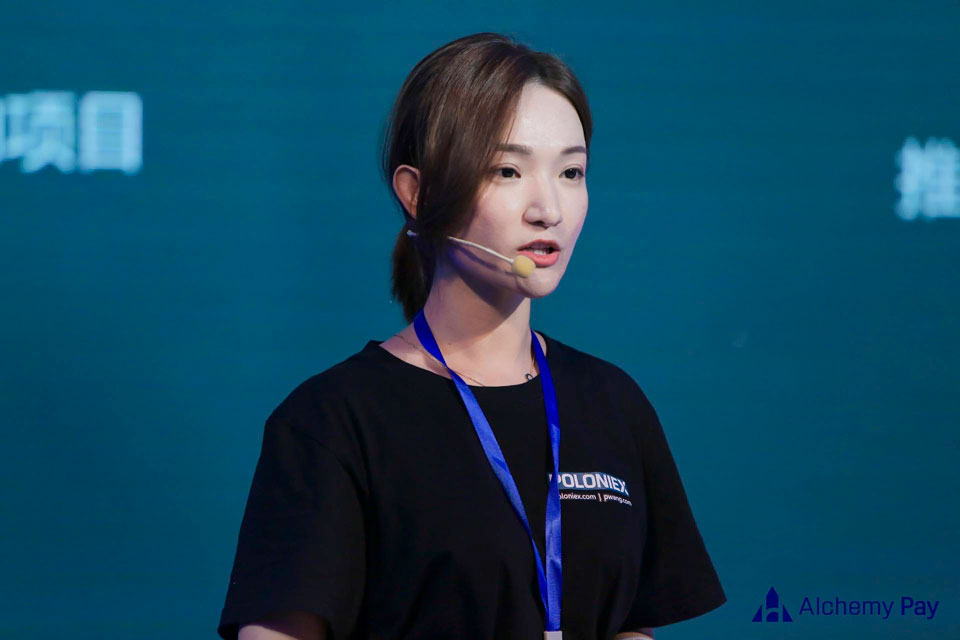 Shelley , Poloniex (P Network) VP of Marketing, gave a keynote speech entitled "Partnership of Poloniex & TRON – Riding the Wind & Waves”. Shelley said that Poloniex has always been committed to providing customers with first-class services, and is actively looking for high-quality assets to join. In addition, Poloniex has established an alliance with Tron and will continue to support the development of the Tron ecosystem. 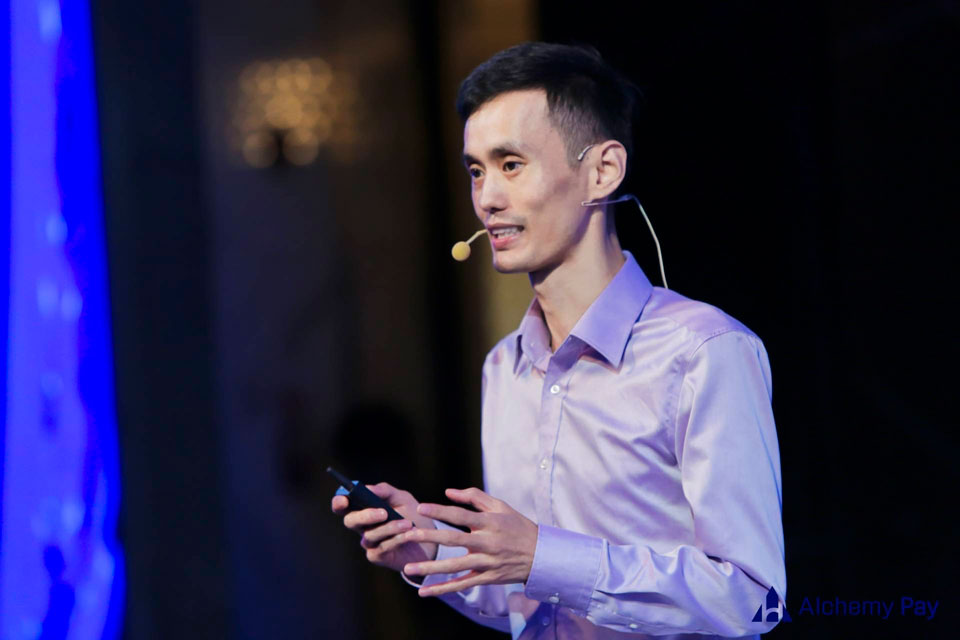 Fan Guolian, Co-Founder and CEO of IPFSUnion, delivered a keynote speech entitled "How should we choose a quality miner in the face of Filecoin data storage trillion gold mines". He said that technology, price, market, strategy, team and compliance are the main judgment criteria. 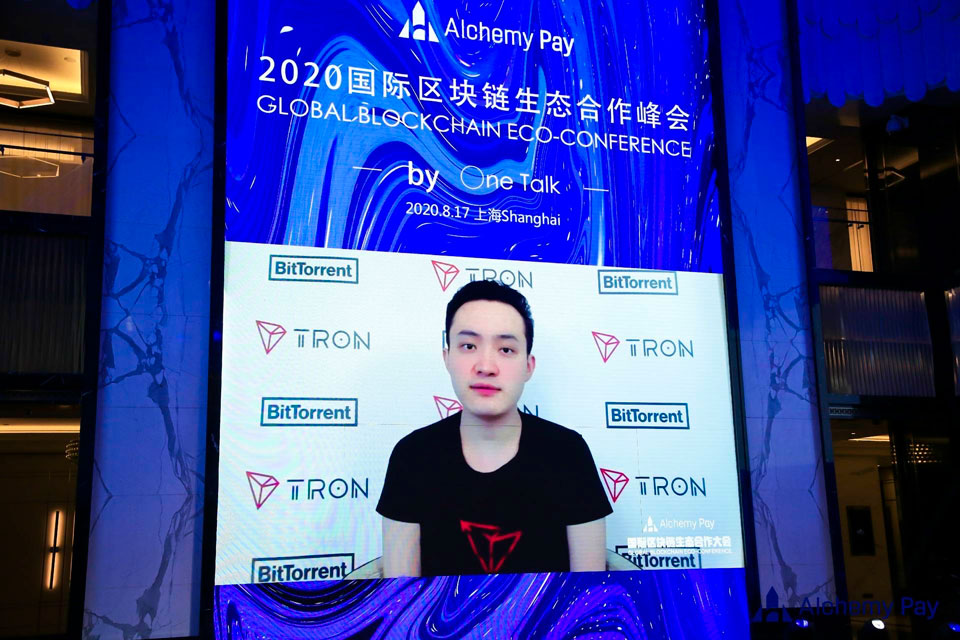 Justin Sun, the Founder of TRON, gave a keynote speech titled "DeFi Boom and TRON’s Road to Advancement". Justin Sun said that TRON had surpassed Ethereum to become the most prosperous public chain ecosystem and has tackled the problems of congestion and high network fees faced on Ethereum. Justin believes that the DeFi wave will be able to bring vitality to the entire market.

In the afternoon, An Xinxin, CEO of Jinse Finance, and Shawn Shi, Co-Founder of Alchemy Pay, had a discussion on "DeFi Encrypted Payment and Market Value Outlook". Shawn said that Alchemy Pay was creating encrypted payment scenarios on a global scale and bridging the gaps between digital and traditional payment. 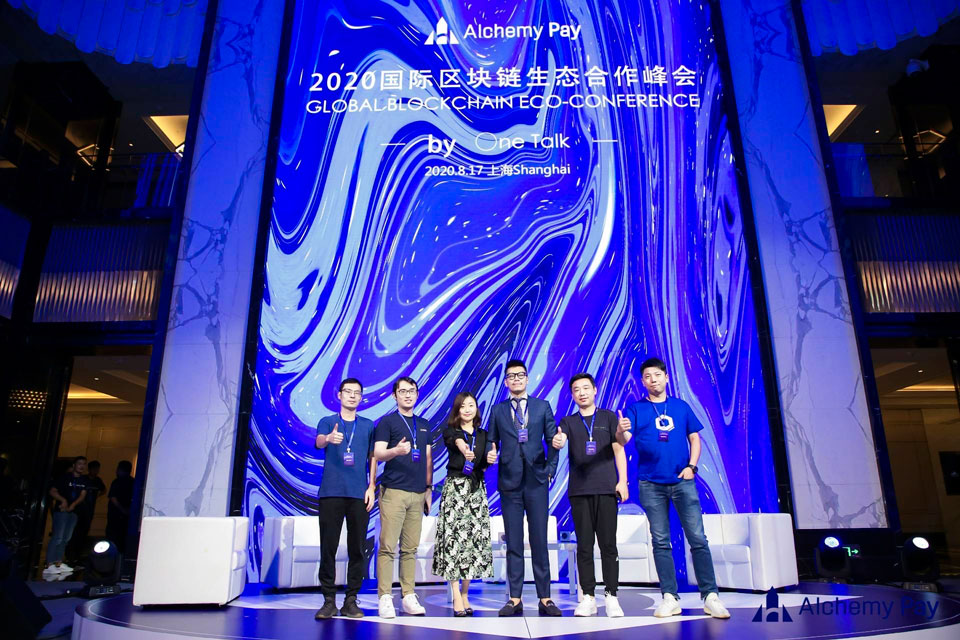 Behind popular topics such as DeFi, what are the investment opportunities? What are the potential challenges? Ms. Li Xing, Special Assistant to the Chairman of Black Hole Capital, Mr. Shao Jianliang of Bisheng Capital, Mr.Alan Peng, Head of Operations at Mclouds, Mr. Ren Zheng, the Founding Partner of Consensus Lab, Mr. Sun Ming, the Partner of Fenbushi Capital, and Mr. Philip Fei, Head of ChainLink China spoke on this topic and shared their insights. 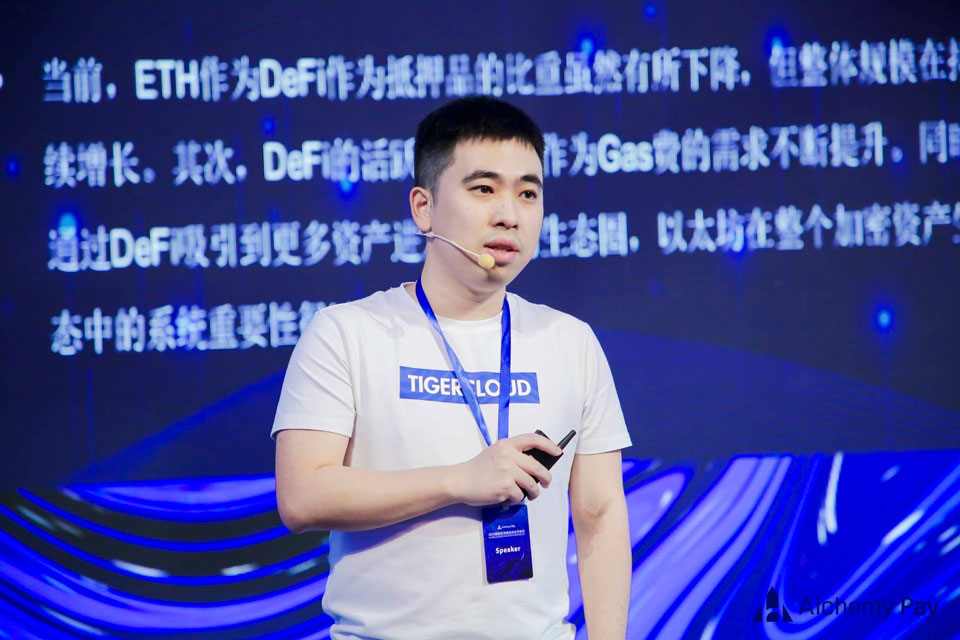 Subsequently, Mr.Lin Jiapeng, the Founder of LinkVC, gave a keynote speech entitled "Blockchain Finance, An Unstoppable Trend". Mr.Lin said DeFi had opened room for programmable finance but challenges lie ahead. He also shared that the path ahead of exchanges may soon be defined. Finally, David Chaum, a famous cryptographer and Founder of xx network who is commonly referred to as the "Father of Digital Currency", gave a keynote speech entitled "what is the ultimate form of encrypted world construction". After introducing the invention of electronic cash, as a senior cryptographic expert, David Chaum said that digital payment represents the future, which gives us the opportunity to truly improve the use of payment systems and will become a huge catalyst for economic growth. David Chaum also introduced the technical principles behind the xx.network The media partners at 2020 Global Blockchain Eco-Conference were: Jinshe, Huoxing Caijing, ChainDD, Daily Planet, CoinTelegraph, Innoverview, Tokenclub, TuoniaoX, PANews and other mainstream media. Specifically, there was a great focus on latest technological achievements and solutions of the blockchain, and promotion of the ecological development of blockchain industry. The event further drove innovation of blockchain technology through comprehensive in-depth exchanges and discussions.

AlchemyPay, a fast-growing and innovative global blockchain company, has been committed to promoting the adoption and use of blockchain payment technologies, and has become one of the key movers in the payment revolution.