An unprecedented sell-off has taken Bitcoin’s purchasing power sky high. Following a market downturn, crude oil is now so cheap that a single Bitcoin (BTC) can buy over 600 barrels.

According to data from monitoring resources, including Bloomberg on April 20, futures for a barrel of WTI expiring in May shed 36% on the day.

At press time, the contracts were worth $11.37 — heading for their lowest since inception back in 1983.

Despite attempts to cut supply, it appears oil markets may well fulfill the prophecy of Bitcoin proponents and fall to $10 per barrel or lower.

As Cointelegraph reported, even United States President Donald Trump forecast a barrel changing hands for $9, at the time seemingly unfazed by the prospect. 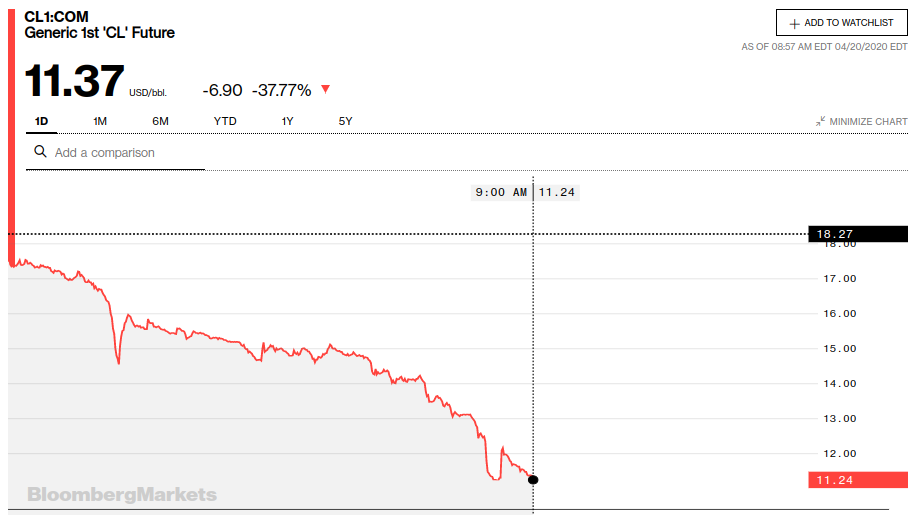 At the same time, the gap between May and June futures has widened. This indicates that despite the rout, belief remains that a major bounceback will occur.

That wasn’t enough to avoid some unlikely scenes elsewhere in the oil market. On Monday, Western Canadian Select even managed to break into negative prices.

“Even negative oil .. because shutting down production is more expensive than giving it away,” Bitcoin price analyst PlanB summarized.

There was an air of amusement among Bitcoiners as prices dropped, with BTC/USD remaining broadly steady at $7,000.

“How long can you run an Antminer S9 with 1 barrel of crude oil?” CasaHODL co-founder, Jameson Lopp, mused on Twitter.

Others noted that at a price of $180 per coin, even a single Ether (ETH) was enough to purchase over 15 barrels of WTI. Black gold’s volatility was plain to see compared to other macro assets. Year to date, WTI is down 64%.

Bitcoin has been broadly indifferent to the oil market in recent weeks, more closely tracking movements in major stock markets.