In July, Uber released a new open source AI library called the Plato research dialogue system. A couple of months ago, Cisco open-sourced its MindMeld conversational AI platform, after acquiring the company of the same name in 2017 for $125 million.

Why are so many new libraries being announced? There seems to be a trend of developers adopting open source conversational AI and leaving behind closed-source alternatives. Most of the key tooling for building conversational AI that has been developed in the last three years is open source. And companies like Uber and Cisco want to be in the running to define the standard conversational AI stack.

In fact, the whole field of AI has seen a strong shift toward open source infrastructure in the past few years. The initial spark may have been Google’s decision to open-source TensorFlow in 2015. At that point, many businesses started paying attention. Google Search data shows that interest in open source libraries like TensorFlow and PyTorch has grown at the expense of closed platforms such as IBM Watson and Amazon’s Sagemaker. 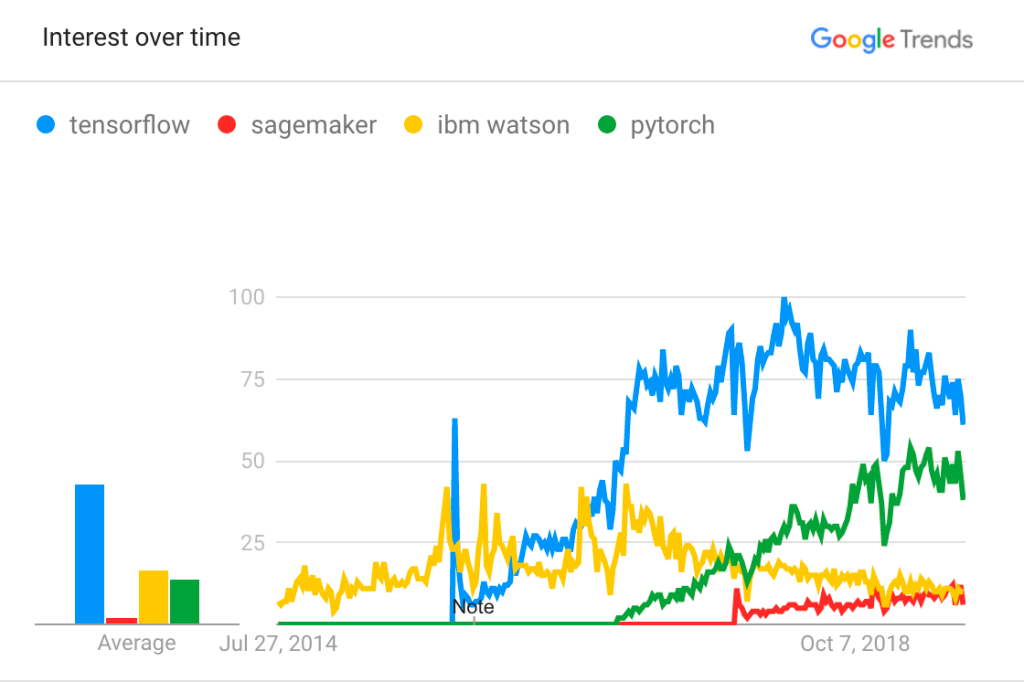 The market is driving this shift. Companies are increasingly deciding that many of the AI capabilities they need are strategically important and should be developed in-house. By using open source tools, they can build up their own training data sets and other IP, such as custom integrations with their backend systems. By developing the talent, data, and software to ship AI themselves, these companies control their own AI destiny.

This trend has now reached the field of conversational AI. Looking at developer interest in two of the most popular cloud-based tools, it’s clear the number of questions asked on Stack Overflow has gone flat since early 2018. (Note that although “botframework” is the name of an open source SDK, it’s used to access Microsoft’s conversational AI platform, which is not open source.) 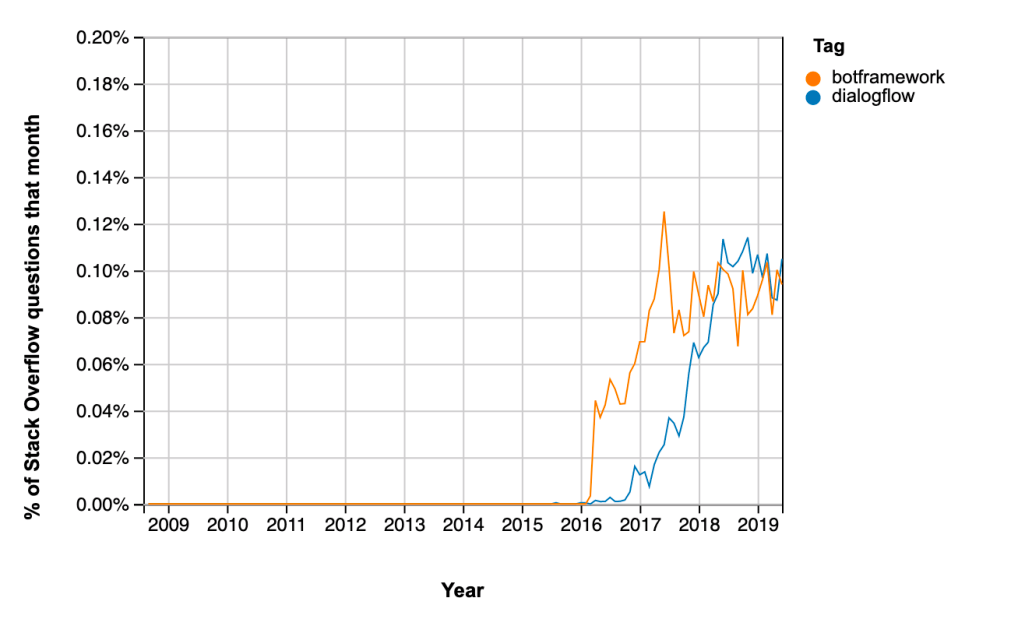 While interest in closed-source tools like Dialogflow and Microsoft Bot Framework has stalled, monthly installations of the most popular open source natural language understanding (NLU) libraries increased six-fold between mid-2018 and mid-2019. I predict that within 12 months, open source will overtake the cloud APIs and become the dominant force in conversational AI.

So why now? In 2016, chatbot hype had reached its peak, with companies exploring chatbots and voice assistants. For building a proof of concept, the convenience of a fully hosted solution like Dialogflow is compelling, because it requires very little in the way of engineering effort or up-front costs. Now, however, companies in various verticals are deploying conversational AI to solve more compelling business problems, and many prefer to control the tools and training themselves.

The market for conversational AI is starting to mature, especially in the banking, insurance, and health care industries. Bank of America’s Erica and Capital One’s Eno are examples from leading banks that have built large teams to develop conversational AI. Challenger startups like Lemonade and N26 are on the path to building autonomous organizations, which becomes possible as the industry moves from level three conversational AI to level five.

As always, with market maturity comes differentiated products. There are already multiple competing open source solutions targeted at different types of developers. MindMeld’s main purpose is to enable developers to build use cases on Cisco-specific conference devices and the wider Cisco ecosystem. Uber’s Plato system operates in a different vertical; it’s optimized for the needs of researchers who want to develop and test new algorithms and evaluate them on standard data sets, similar to other research-focused libraries, such as PyDial and the very recent ConvLab. Then, of course, there’s tooling targeted at developers that are shipping products into production. Vendors include Rasa (where I am CTO and cofounder), DeepPavlov, and Snips.

If open source does overtake the cloud APIs in the next 12 months to become the dominant force in conversational AI, tools from the likes of Cisco and Uber are just the beginning.